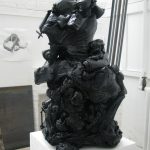 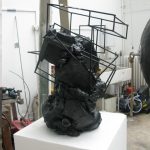 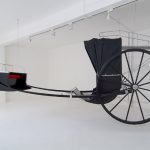 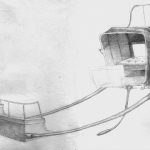 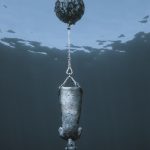 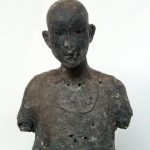 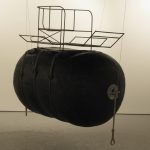 Benedetto Pietromarchi studied classical sculpture at Accademia delle Belle Arti in Carrara, Italy, and architecture at the Architectural Association School of Architecture in London. His study of architecture is evident as the manipulation of scale within his work and its relationship to the viewer’s body is consistently addressed. At the same time, a very high technical acuity is omnipresent, reflecting his classical training in sculpture.

Using varied materials including terracotta, lead, stainless steel and wood, many themes inform Pietromarchi’s work such as: displacement; travel; time and architecture. The scale and size of his playfully surreal objects allow them to become monumental while simultaneously morphing into redundant, yet formally powerful structures.

Much of Pietromarchi’s sculpture centers on the notion of travel; for example, Carrozza, 2007 and Module 1, (single transport), 2009. The size and construction Pietromarchi employs invites the viewer to imagine using the sculpture as a valid form of transportation; however, it is through this evocation that the artist’s work begins to complicate. At once, his works can be seen two ways: as a structural feat or a highly skillful attempt in futility. It is this tension that makes Pietromarchi’s work so compelling.

Notions of the impossible and absurd, coupled with the solidity and permanence of his architectural sculpture, are intended to make the viewer question the origin of what is presented to them. Pietromarchi presents scenes not inherently comprehensible, but which encourage the viewer to contemplate their own physicality in relation to his work. The surreal juxtaposition of objects removed from their expected context is rooted in the artist’s exploration of the unconscious mind and its relation to the human body.

Fusing a lead sculpture (figure 1; Meteopathic) in the studio, connecting it to a nineteenth-century glass buoy and transferring it to the Mediterranean Sea, Pietromarchi explores the effects of time and travel on materiality (figure 2; detail of Meteopathic). He later returned to film the suspended pieces, capturing an arresting tension between stasis and incident (figure 3; video).

The Kenneth Armitage Fellowship was awarded to Pietromarchi in 2009.