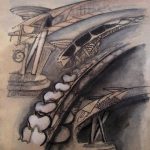 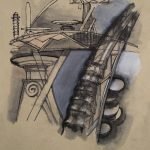 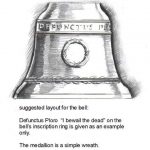 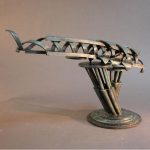 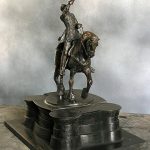 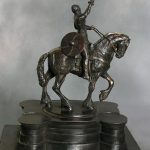 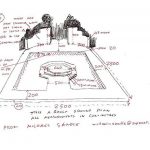 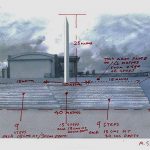 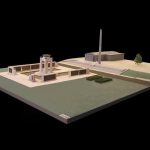 Michael Sandle was born in Weymouth, Dorset in 1936. He studied at Douglas School of Art and Technology, Isle of Man (1951-54) and did his National Service in the Royal Artillery until 1956. During that time he attended evening classes at Chester College of Art. From 1956 to 1959 he studied printmaking at the Slade School of Fine Art, London, under Anthony Gross, Lynton Lamb and Ceri Richards and received tuition from Andrew Forge, Lucian Freud and Claude Rogers. In 1959, he travelled Europe with the assistance of an Abbey Minor Travelling Scholarship and a French Government Scholarship. Periods of teaching in leading British art schools followed throughout the 1960s.

From 1970 to 1973 Sandle lived in Canada. He was Visiting Associate Professor at the University of Calgary, Alberta, until 1971 and held a similar post at the University of British Columbia (1971-72). In 1973 he moved to Germany where he spent time teaching in Pforzheim and as a guest of the DAAD Artists Programme in Berlin (1974-75). He was a member of the faculty of engraving at the British School in Rome from 1976 until 82 and in 1980, was Professor of Sculpture at the Akadenmie der Bildenden Kunste, Karlsruhe until retiring in 1999. Sandle also held the position of Senior Research Fellow at the De Montfort University from 1995 to 1999.

Sandle has exhibited widely including the Paris Biennale (1967) and at Documenta 4 and 6 in Kassel, Germany. He has undertaken a number of commissions, among them a Memorial of the Victims of a Helicopter Disaster, Mannheim (1985); the International Seafarer’s Memorial (2001) at International Maritime Organisation HQ London; and perhaps his most ambitious project to date, the Malta Siege Memorial (1988-92) which stands at the entrance to the Grand Harbour in Valetta. The memorial at Malta stands as a vast project which included not only a major figurative sculpture, but also architecture as he designed the cupola which houses a thirteen-tonne bronze bell. Themes of war, death, destruction, inhumanity and media manipulation are constant in his work, as he treads a path outside the fashionable mainstream.

Michael Sandle was elected Royal Academician in 1989 (he resigned in 1995 in objection to the ‘Sensation’ exhibition) and Fellow of the Royal Society of British Sculptors in 1994 and re-elected 2004.

The Kenneth Armitage Fellowship was awarded in 2005. He currently lives and works in London.